I would like to remember Niel Solomon here. His memorial was the the same evening as this concert, and I think he would have enjoyed the program very much, and the concerto in particular, which was very dear to him. I’m sure he was there in spirit.

The packed City Hall welcomed Martin Panteleev back to the stage yesterday on a beautiful balmy evening, wondering: “Why don’t they open those high windows around the ceiling”? I have never seen the City Hall so full. Tickets were sold out by Tuesday, causing just under 200 lovers of the Rachmaninov concerto to attend the morning rehearsal. Although we only saw Panteleev last month at the FOM Gala Concert, he has been performing fairly non-stop across Europe, including the debut of his new composition “Archetype” in the Cadogan Hall with Royal Philharmonic, London, and the Verdi requiem back home in Sofia, Bulgaria. 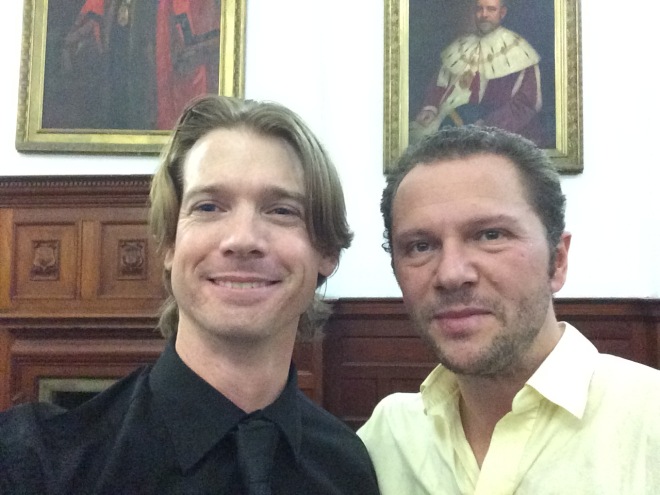 Tchaikovsky, Francesca da Rimini – CTPO, Martin Panteleev
The orchestra sounded present and aware of their sound, with succinct entries from brass and winds, fantastic unison in the double basses, and excellent control by the trumpets at low volume. Beatrix Mari du Toit delivered a haunting, heart stopping clarinet solo, which fitted exactly with the feeling of the work – and Panteleev also interpreted this feeling throughout the performance – a kind of sensitivity and that an earnest person of high emotional intelligence would use to express their state of mind. Panteleev encouraged this feeling to become a conversation between the orchestral parts, expertly coordinating this dialogue, with impeccable timing in keeping the many overlapping entries together while maintaining the flow and sensibility of the conversation. This work is extremely complex: Tchaikovsky has scored many interweaving parts, and Panteleev masterfully separated them dynamically into different volume levels, with the effect that each can be heard more easily as an individual voice. Fugue-like, each new level builds the intensity, however, Panteleev always leaves enough in reserve for a surprising climax. The coda accelerated into a supernova!

Unusually for the first work of the evening, the standing audience brought him back.

Rachmaninov Piano Concerto No. 3 – Stewart Goodyear, CTPO, Martin Panteleev
The Holy Grail of piano concertos begins so very simply that I listened almost tentatively to the whole exposition, not knowing the true skill of the pianist until the exposition repeats. Goodyear was a delight to hear. He kept the octave theme dynamic and interesting, and before long I was impressed by his technique – every semiquaver was audible with beautiful phrasing: lyrically and simple, his left hand just a touch softer the his right. They began with a refreshing yet acceptable pace, which I found exciting. Loosing myself in a work I am trying to review is always a sign that it is in that moment beyond words. It is Rachmaninov, that is all.

Goodyear’s cadenza brought me back into critical thinking – such passion, almost overwhelming, and such accuracy, it was mind blowing! His trills were absolutely even, seeming to know the City Hall’s Steinway as if it were his own. Both lyrically and technically, Goodyear is an amazing pianist, his fingers powerfully lifting the adagio theme from the rest of his hand. He showed incredible virtuoso at any volume with the same pace and accuracy. In fact Goodyear’s second and third movements were pacier than usual, which did put the orchestra in the hot spot under those lights! Rachmaninov played this well almost sounds insane! How is he doing this? I have not ruled out magic… He returned from Lisztian thunderstorms to such sweetness, it was enchanting, intoxicating, his hands were like hummingbirds! Breathless, at the edges of our belief systems, our spinning heads tried to believe the accelerando into the coda!

My mind was unhinged. As the audience leapt to their feet I remained slack-jawed in my chair. Is this kind of playing legal? Where can we get more?

Stravinsky, The Rite of Spring – CTPO, Martin Panteleev
For a conductor, this must be one of the most challenging works in the repertoire. Panteleev’s solution to holding the orchestra, seemed to be an emphasis on the rhythm. Watching him conduct this highly syncopated work, was like watching a DJ mixing electronic music – he was dancing, letting his body mark the tempo, and leaving his hands free to indicate dynamics and entries from the orchestra. This is a rare skill in conducting – the freedom to use any means necessary to conduct a difficult work without looking ridiculous! The resulting performance was a sensible ordering of the chaos that is Stravinsky’s expression of a barbaric ancient festival.