Hadari’s “Unfinished” was Zeus-like, a majestic and unwavering rule of lightning rod severity contrasting with tenderness and the sweet rocking of babies. At a breezy 114 bpm, his Allegro moderato was compelling, bringing the audience immediately into the adventure with a sense of movement and excitement. The CTPO was crisp, clean, light, and accurate, giving the impression of a chamber performance. From row D, the synchronised bow movement of the strings is quite striking, visualy affirming the precision in the sound. I enjoyed the contrast between the agitato violins in the first subject, and the wonderful sweet lyrical celli in the second subject.

Sawallisch has a recording of the Andante at around 80 bpm. Schubert’s indication Andante con moto – with movement, may well have inspired Hadari’s interpretation at around 104. Of course this is entirely a matter of opinion and personal taste, and a highly debated topic: one should never sacrifice a work for the display of speed or technique. My 2 cents worth: If the emotional integrity of the work is present, I like the feeling of moving through it. It gives me a clearer understanding of the shape and form of the work. At slower tempi I tend to become distracted in the detail, and lose sight of where the composer is going. Hadari gave us this masterpiece complete in its poignancy, serenity, pristine peace and perfection. Beautiful ensemble playing from the winds.

One second after the last note of the Beethoven 9th symphony, Omri Hadari with the CTPO and NAC Choir

Hadari’s Beethoven seemed to take the CTPO to their limit and then hold them there while they annealed, integrated, and grew stronger. Here is the work of a world class conductor forging and tempering an orchestra while simultaneously giving a phenomenal performance that could make mountains weep.

In the first movement Hadari’s brilliant building, moulding, and shaping of phrasing described the feeling of enforced separation. The second subject, suggesting friendship and working together, is denied by the recapitulation of the first subject: dogmatic, primal, controlling, and domineering. Beethoven seems to be describing the human tendency to separate and control one another instead of working together and combining our skills to create win-win situations, as if to say “Muss es sein? Es muss sein.” – Are humans really that dumb? Yes they are.

The second movement gravitated around 122 but Hadari’s tempo was fluid, highly expressive and always tasteful. The Presto picked up to 160, as steam rose from the bassoons and horns – excellent, well controlled, virtuosic playing. It was around this time that I noticed the extent to which Concertmaster Farida Bacharova fulfilled her roll as orchestra leader. With a challenge like a Beethoven symphony in which every member of the orchestra is expected to be a highly skilled virtuoso instrumentalist, the work is very demanding and the conductor simply can not look after all sections at once. Bacharova lead confidently and kept the orchestra integrated through some of the most challenging material ever written for orchestra.

As the tsunami of light washed over me from the angels of the New Apostolic Church Choir flying high over the Cape Town Philharmonic Orchestra, I blissfully surrendered to the ever breaking wave of consciousness that is Beethoven’s Ode to Joy. There was no time or space, just awareness, and in that space I saw an auditorium full of mostly Caucasian people, and a choir on the stage full of mostly Coloured people, and I wondered whats up with that? Did I time travel back to 1980?

In the depth of such beauty and salvation, I felt the national split of the past, and I saw the thin veneer of “reconciliation” over the top, like a band-aid. I felt the bottomless sadness that perhaps inspired Beethoven to write his 9th symphony. Transcending his own struggle, being criticised for his personality and doubted for his deafness, Beethoven tried to show everyone in the world and in the future world, how to stop hurting each other, see our similarities, and forgive each other for what happened in the past. He knew what we went through in South Africa, it’s a tale as old as time and it will continue as long as people control and dominate other people. Spin the globe, stop it with your finger, you will find the same story there.

I felt separated from my brothers and sisters on the stage and I prayed with every cell in my body that Beethoven’s wish, and Schiller’s wish, and my wish could come true: “Every man becomes a brother… Every sin shall be forgiven.”

From what Iv seen as a therapist working with trauma and abuse, forgiveness happens when individuals decide for themselves that they are ready to make real change in their hearts, and their families, and their lives. Punishing can be replaced by forgiveness, we choose it. There will be objections; criticism; feelings of guilt; questions of betrayal, because the old ways of separation are still very much alive, holding us back in 1980. Forget about government, the only way to melt the shattered heart of our nation into one connected functional organ, is for people to do something real every day until it becomes normal: choose friendship and working together. 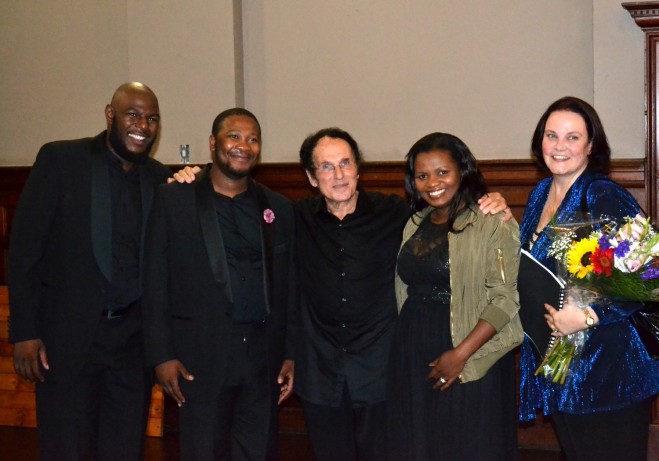